Inventia.pl > News > Inventia at the “Internet of Things – Future Poland” conference at the Ministry of Digital Affairs

The impact of the Internet of Things (IoT), artificial intelligence and 5G technology on the domestic economy was discussed.

In one year perspective, up to 50 billion devices will be connected to the IT network. According to the conference participants, the overriding goal is to take the advantage of IoT capabilities so that in 2025 Poland would have intelligent cities and villages, would not deviate from technological solutions in other countries of the world and would create the “Future Poland”.

During the meeting, a comprehensive report entitled “IoT in the Polish economy” was presented. It was prepared by the Working Groups on the Internet of Things, created in August 2018 at the Ministry of Digital Affairs. The report was created by representatives of industry chambers of commerce, unions, and associations of employers, social organizations and entrepreneurs. One of them was Inventia – the manufacturer of the professional AGREUS solution, a system supporting planters in making agrotechnical decisions.

We feel honored to create a chapter on Agriculture and Environmental Protection. The recently widely commented activities aimed at restoring the original state of the nature, which surrounds us, natural resources, optimizing the use of groundwater, increasing production safety and food supply, among others by rationalizing the fertilization of farmlands, orchards and gardens are aimed at solving significant problems of civilization. We are facing the destruction of the Earth. Scientists predict that if we do not stop our destructive activities, water resources will run out in 2050.

Each of the solutions described in the report, which support activities for the development of the Polish economy based on the Internet of Things concept, were presented during the conference in the form of short presentations. President of Inventia – Jerzy Białousz discussed the benefits of installing the AGREUS system in areas covered by metering. He pointed out that we can not control climatic conditions, but we can prevent the effects they cause. 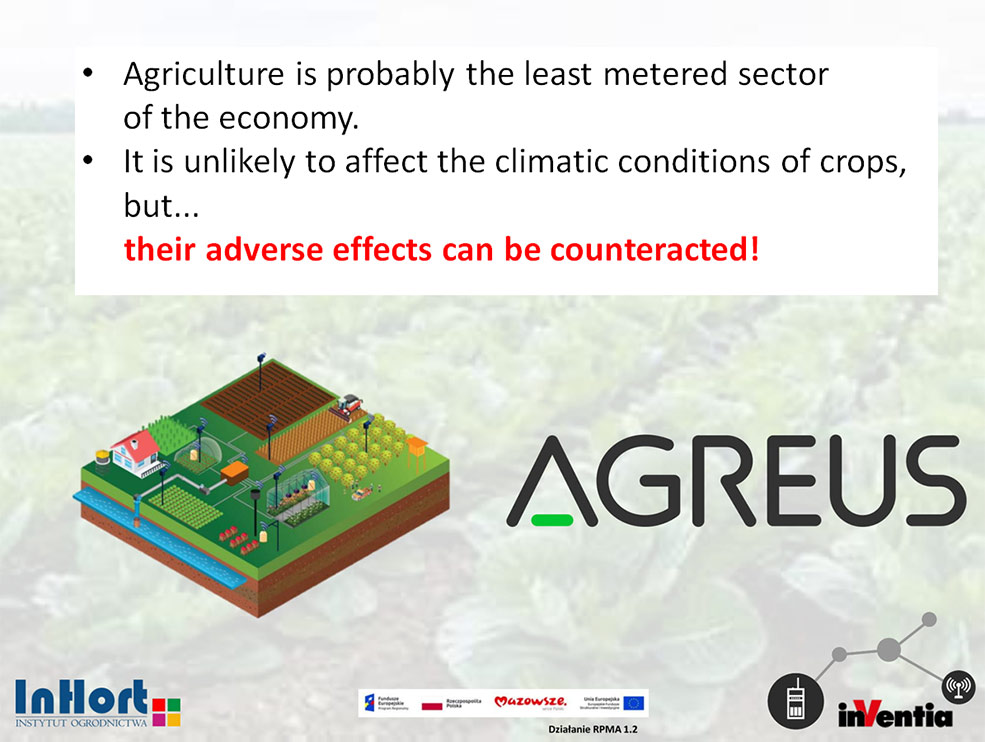 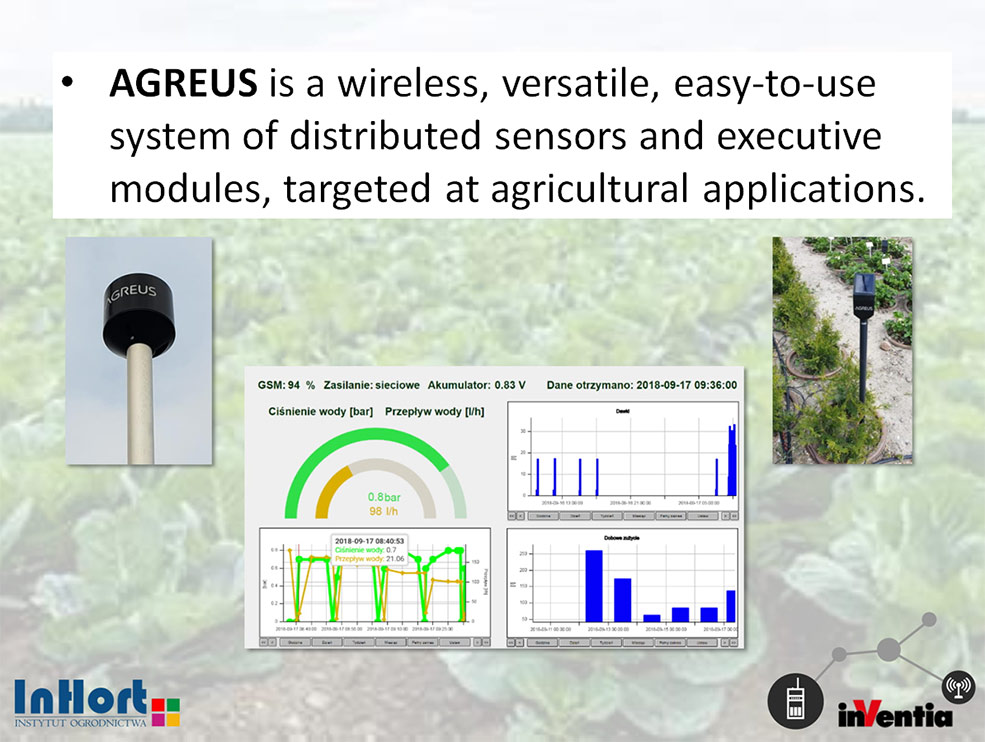 The eSAD system, currently named AGREUS, is the result of cooperation between Inventia and Professor Waldemar Treder from the Institute of Horticulture in Skierniewice. Operation of the system is based on a sensor network from which data is sent to the heart of the system – i.e. the base station, using the LoRa wireless long-range radio network. By connecting the station to the Internet, it is possible to provide data to the AGREUS portal which runs in the cloud. The data collected is used by farmers to analyze conditions necessary to optimize vegetation of plants and control the entire farm from anywhere on Earth.

The application of IoT solutions in agriculture will allow supporting the management and optimization of food production, which seems to be indispensable in the conditions of an ever-growing population of consumers, who have increasingly high demands on the quantity and quality of food. It will also allow intensification of activities related to environmental monitoring – combating droughts, increasing salinity of soils, smog and water pollution.

We invite you to read the report, paying close attention to pages 72-79. You will learn about the extent of the possibility of using IoT in the agricultural industry and what functions can be taken over by the intelligent Inventia AGREUS system, which will undoubtedly solve the urgent problems of Polish agriculture and, what is equally important, will contribute to the improvement of the natural environment.

We also encourage you to read an article by Professor Waldemar Treder entitled “Telemetry in the orchard. Precise irrigation thanks to telemetry” and an interview of the same title by Dorota Łabanowska-Bury – editor-in-chief of monthly journal “Strawberry, raspberry, blueberries”, with CEO Jerzy Białousz.

Irrigation according to the set plan

Telemetry in the orchard - precise irrigation thanks to telemetry

Read more (only in Polish)

AGREUS - Agriculture 4.0, or IIoT in horticultural and agricultural practice